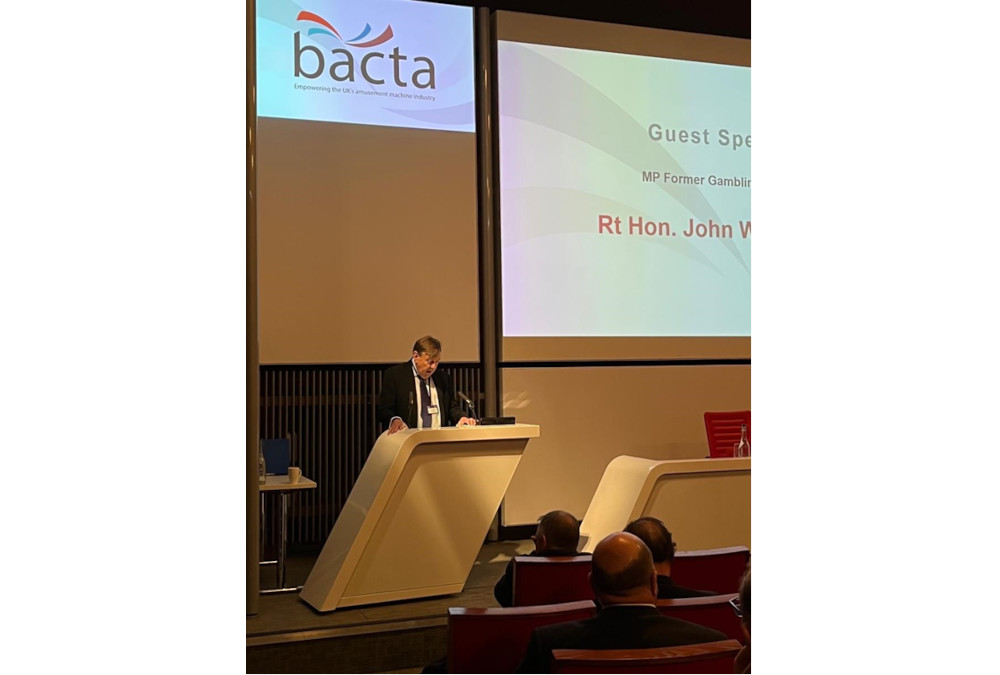 Following last week’s annual Convention, politicians and bacta members have acknowledged the thorough and effective work of the trade association.

On the eve of the Convention, Nigel Huddlestone MP told guests at the reception that bacta had lobbied effectively throughout the lockdowns of 2020-21 and praised the association’s fundraising efforts. During the reception itself, John Whittingdale MP – former Gambling Minister – praised bacta’s effectiveness and the fact that the body had secured meetings with the new Gambling Minister Chris Philp, despite his massive workload resulting from fewer staff at DCMS. Whittingdale also endorsed the importance of bacta’s relationship with figures such as Carolyn Harris MP, Chair of the Gambling Related Harm APPG.

Delegates were impressed with the speaker line-up at this year’s Convention, which also comprised of Sarah Gardner – Deputy CEO of the Gambling Commission, who highlighted the importance of industry collaboration and the Commission’s role in helping to instruct Government during the Gambling Review.

“All the Merkur UK businesses were represented at the convention. It was of great interest to hear from Sarah Gardner as to what the Gambling Commission expect from the land-based business and from John Whittingdale on how he sees the time frame and challenges facing us in achieving a positive outcome from the Gambling Review. I was pleased that the focus of John White’s speech was on the High Street, and we look forward to continuing to work with Bacta in changing the misperceptions of our sector,” said Sascha Blodau, General Manager, Gauselmann UK.

Elizabeth Speed, General Counsel at Novomatic UK also commented, “John Whittingdale’s observations and Sarah Gardner’s overview from the Commission were particularly interesting, as was the explanation by Cebr of their report detailing the contribution of AGCs to our high streets and the wider economy. I was pleased to hear that AGCs will be a major focus for bacta going forward.”

“Although I personally was unable to attend the Convention this year, Inspired were represented and I received reports and read the excellent press coverage,” said Peter Davies, Managing Director, Inspired Gaming. “I am pleased with the way bacta continues to represent the industry so strongly as manifested in speeches from Sarah Gardner and John Whittingdale.”

Seaside arcade operator Shaney Farr, Owner, iFun Family Entertainment Centre in Herne Bay, praised bacta’s support through the pandemic. “Throughout Covid, bacta’s frequent updates have been invaluable. Their practical and useful advice and continuous efforts to provide us with as much help as possible has been very much appreciated. They appear to have worked extremely hard to secure us as much financial aid as possible and I personally have found their advice and support really helpful in navigating my business through such unprecedented times.”

This was a sentiment echoed by Mike Brocklehurst, Arcade Operations Manager at Brighton Pier, who said, “I think Bacta has done and still does an amazing job, over the last 18 months of this pandemic their guidance and advice has been invaluable in understanding our legal responsibilities and how to open and operate safely.

“The amount of lobbying and work that must go in to communicating to all the government departments to get our interests heard! They may not have always got the outcome that we wanted, but they did get us answers and a feeling that we as an Industry were at least heard.

I think the fact they are supporting our distributors, suppliers and manufacturers at the upcoming EAG by waiving fees is an incredible gesture and I don’t think you would find many other trade associations doing similar.”

John White, bacta CEO concluded, “It was great to see members in person at this year’s excellent Convention and Parliamentary Reception. I was particularly pleased to hear the ringing endorsements of bacta’s work both from members and politicians and other stakeholders with whom we engage. Bacta’s representational spread and the political skills we can access means, as both ex gambling Minister, John Whittingdale, and Tourism Minister, Nigel Huddleston, acknowledged, that we do the right things in the right places at the right time.”